The Nerf Rival MXVII-10K has been a great addition to the nerf fanatics. It is a lot more fun than a regular blaster.

As you can load up to 100 balls and shoot them continuously, add dimensions to nerf wars. But it will be embarrassing if it stops during the war.

So, why is your Nerf Rival MXVII-10K not working?

There can be several reasons behind your Nerf Rival MXVII-10K not working. If you leave the hopper door open or the safety catch is on, your gun won’t work. Other technical issues include faulty circuit board or motor, trigger failure, wiring problems, and jamming. These issues can break your gun.

This is just a preview of the issue. If you are intrigued to know more about this issue, we have just the perfect article for you.

In this article, we will talk about the problems in detail and try to give probable fixes to the problems.

So, without any further ado, let’s start.

The Nerf Rival MXVII-10K is quite a recent gun compared to other popular ones. It was released in 2017 under the Nerf Rival series. It is an automatic Rival gun that can shoot up to 100 balls in a continuous fashion.

It comes with a hopper where all the ammo is deposited. There is a hopper door on top of the gun beside the tactical rails.

The ammo of this gun is referred to as High-Impact Rounds. The hopper can be removed from the gun body.

The Nerf Rival MXVII-10K is a flywheel blaster. It is designed keeping the high intensity and precision of nerf wars in mind. The blaster is quite stable in hand and the grip feels very snug and solid.

But it has issues with revving. Similar to Nerf Rhino Fire issues, sometimes the gun stops working momentarily. It can be very annoying in the middle of a nerf war. 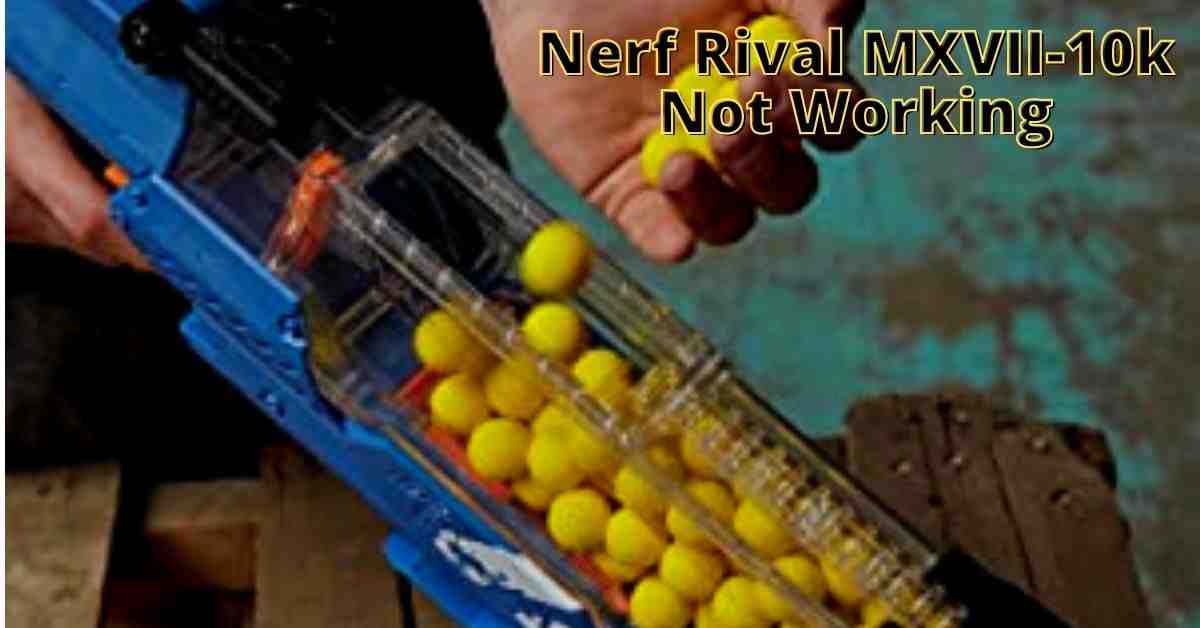 There can be a lot of reasons behind a gun not working. However, it is not truly possible to find out each one of them and provide solutions.

Thus, we have accumulated the most common problem that causes Nerf Rival MXVII-10K not to work.

After filling the hopper and starting to fire the gun, you must ensure that the hopper lid or door has been closed properly. If it stays open, it can mess with the gun.

An open hopper door restricts the gun from revving and firing. If you forgot to shut the door, you may have fallen prey to this issue.

There is another safety catch switch. That can also stop your Nerf Rival MXVII-10K from working normally.

This Nerf gun is a fully-automatic flywheel blaster. It is assisted by a motor that shoots the bullets.

Due to the motor, the gun can continuously shoot high-impact rounds. It is quite a different type of blaster in comparison with regular Mavericks and Strongarms.

So, if the motor in the gun is faulty or has issues with it, the gun will stop working altogether.

It won’t be able to shoot at all, as Nerf Rival MXVII-10K doesn’t feature any single shot fire mode. It is fully dependent on the motor.

If the battery of your Nerf Rival MXVII-10K is discharged, then it will stop working. As the gun is operated by electric motors, a stable supply of power is essential.

Without a power source, the motor will not be able to push the rounds.

The gun can operate both on ‘D’ batteries as well as rechargeable battery packs. If you have a multimeter around, you can check if the battery is supplying the required volts to the gun or not.

If it is not providing power to the gun, that must be the reason for failure.

The firing mechanism of the Nerf Rival MXVII-10K is pretty solid. It uses a conveyor belt to push the darts towards the flywheel base.

Once the round reaches the flywheel, it is immediately shot through the firing hole.

But if the conveyor belt is broken then the round can’t be pushed towards the flywheel base.

Thus, the gun will not fire properly. So, a broken conveyor belt can be a major reason behind your Nerf Rival MXVII-10K not working.

As the Nerf Rival MXVII-10K features a flywheel base, there’s a second trigger. If there is anything stuck between the triggers, it can jam the entire process of firing the gun.

Sometimes, a small broken piece of another part of the gun gets stuck in the triggers.

If the trigger is jammed, the gun will not be able to fire a single round.

Thus, the gun will stop working until the issue is taken care of. So, this can be another reason why your Nerf Rival MXVII-10K isn’t working.

The first thing you must check is if you have closed the hopper door or not. If you haven’t closed it, then closing the door might fix the issue for you. Also, pay special attention to the safety catch switch.

If the hopper door is closed, try checking the motor and the batteries. If the motor is failing, your best bet is to replace that with a new one and you should have your nerf gun working.

If the conveyor belt is broken, you need to get a replacement or your nerf gun won’t function properly. And for trigger issues, open the gun up and take out the stuck part to free the triggers.

If you have followed the fixes mentioned, you should be able to enjoy your Nerf Rival MXVII-10K now.

Can I use a different hopper of my Nerf Rival MXVII-10K?

If it is a mod and compatible with the blaster, you should be able to use a different hopper.

Does Nerf Rival MXVII-10K have an acceleration trigger?

Yes, it has an acceleration trigger and a firing trigger.

Does Nerf Rival MXVII-10K have a single fire mode?

No, it doesn’t. The Nerf Rival MXVII-10K is a flywheel blaster. So, it’s fully automatic.

So, that’s the end of our today’s segment. Now you have a better understanding of the problems of the flywheel blaster.

Hope we were able to provide the answer to your query – why is my Nerf Rival MXVII-10K not working?

Leave us feedback if you liked our content. Best of luck!