While deciding on a nerf sidearm, Strongarm and Disruptor are two names that are always thrown around. These are two very capable revolver blasters that nerf warriors love to take to wars.

But there’s only one slot for the sidearm to carry in a nerf war. Which one would you take with you in a war with friends?

It all comes down to which is the better blaster between Nerf Strongarm vs Disruptor?

In stock condition, undoubtedly Disruptor is an overall better blaster. With better range, reloading ease, and finer grip, Disruptor edges out Strongarm by some margin. But in terms of modding potential, Strongarm is far ahead of its competition.

Apart from that, there’s a lot more to talk about these two iconic slamfire blasters. Though the sidearms have many similarities, they’re things that set them apart from each other. 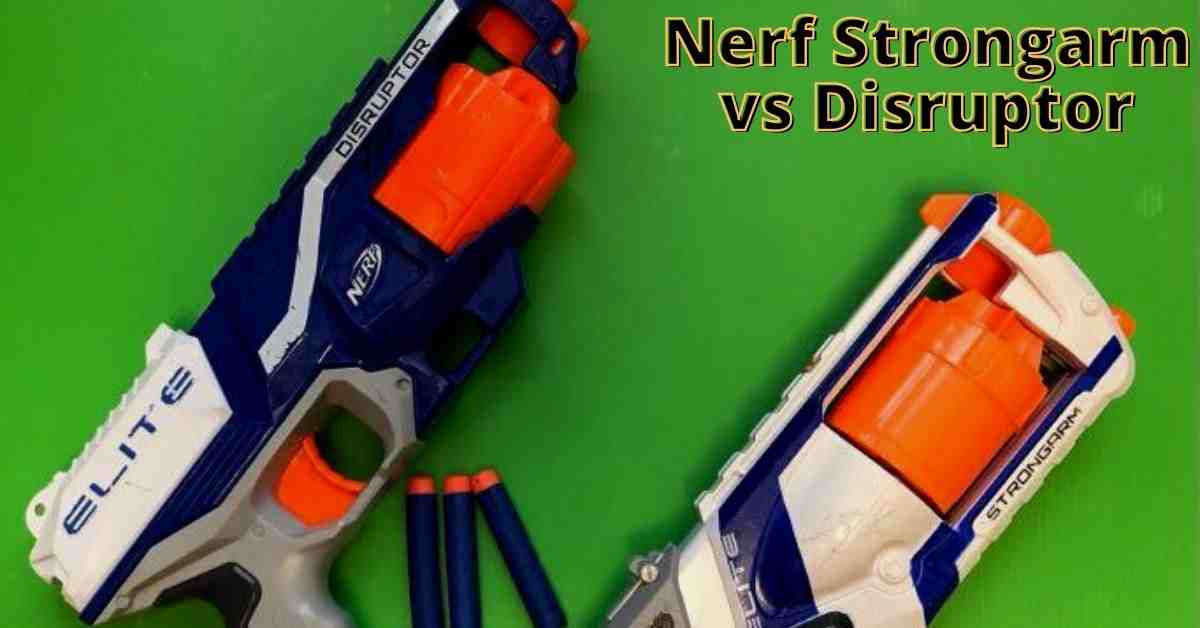 Nerf Disruptor is a generational refresh of Nerf Strongarm. With every refresh, Nerf tries to address flaws from the previous release. It was a similar thing with Disruptor.

The introduction of Strongarm was four years before Disruptor. Strongarm is a slamfire revolver blaster released in 2013. It can hold six elite darts in its drum and the reloading is done by flipping out the drum.

Nerf Disruptor was released in early 2017. Similar to its predecessor, it’s also a slamfire blaster that can store six elite darts. But the cylinder construction and reloading mechanism are different on this one.

Both the guns feature a priming indicator that switches between white and orange. They share some of the design aesthetics. But Strongarm and Maverick (predecessor to Strongarm) have similar style fronts while Disruptor doesn’t.

You can also mod these two guns as you want. Nerf Strongarm has more mods available than Disruptor. Here are some of the mod kits that you may fancy for your Nerf Strongarm and Disruptor –

At first glance, Strongarm and Disruptor may seem identical to your eyes. They share a common design language. But upon close inspection, the differences will become more imminent.

Now that you know the basic differences between the blasters, it’s time to go into details. Here is a comprehensive comparison between Nerf Strongarm and Disruptor –

Both the blasters can hold six elite darts in their drums. But due to the flip and reload mechanism of Strongarm, reloading the gun is time-consuming. Whereas, the exposed barrel of the Disruptor is easier to reload on the fly.

You can forcefully reload the Strongarm without flipping out the barrel too. But it has a high chance of getting the darts stuck and not shooting the gun.

In a high-intensity nerf war, minimizing the reload time can drastically help you to get the upper hand. That’s why we rate Disruptor much higher than Strongarm in this category.

But the flip-out and reload of Strongarm is a very fun and classic revolver feature. It lets you play Russian roulette that Disruptor misses a big time. So, it goes down to personal preference.

In terms of the range on the gun, Disruptor is a clear winner.

Nerf Disruptor can shoot up to 90 feet or 27 meters as advertised. On the other hand, Nerf Strongarm can shoot darts up to 75 feet or 22 meters. That’s 15 feet or 5 meters range advantage to the Nerf Disruptor.

So, if you take nerf battles seriously, Disruptor is probably your better bet on winning it. Strongarm is a good shout but not better than Disruptor here. Both the guns have slam-fire action.

Margin is very fine but we think we like Disruptor’s handgrip better. Though both grips are very similar, Disruptor tends to give a firmer grip than Strongarm. It just feels more comfortable.

But there’s a mismatch here. On a few forums, we have seen individuals siding with Nerf Strongarm for a better hand feel. So, it again comes down to personal preference here.

But to us, Nerf Disruptor edges out Strongarm in terms of handgrip by the slightest of margin.

We have a clear winner here. Hands down, Strongarm is a better pick for modding. It has many mods available in the market.

Strongarm was released four years before Disruptor and it’s a fan favorite. So, the variety of mods available for Strongarm wipes out Disruptor. But in stock condition, Disruptor is a better blaster. It doesn’t require much modding.

Nerf Disruptor is a lot cheaper than Strongarm, coming at half the price. In the Amazon Nerf store, Strongarm is still listed at $31.09. Whereas, Disruptor comes at as cheap as $13.99.

You can get the Strongarm at a much cheaper price than that. But in terms of value, we just think Nerf Disruptor surpasses Strongarm by quite a distance.

Also, if you want to mod your Strongarm to become better than Disruptor, you would need to spend extra. So overall, Strongarm is not an economic deal but Disruptor is.

If you still can’t decide whether to buy Nerf Strongarm or Disruptor, let us make that choice easier for you.

If you need a superior blaster and don’t plan on modding it, Disruptor is the one you should pick. It is a clear upgrade over the Strongarm. Also, it costs less than the Strongarm.

But if you plan to mod the gun, then you may pick the Strongarm. Though it lacks in Nerf war capabilities, modding it will make a significant difference.

Overall, as a stock pick, we highly recommend Nerf Disruptor. Then again, it comes down to what you are expecting from your blaster sidearm.

Modded Strongarm or Disruptor – which is better?

We would pick modded Strongarm here. If you can spend a few bucks on modding the Strongarm, it becomes a beast.

How do Strongarm and Disruptor compare to Maverick?

Both the guns are better than the Maverick in our consideration.

Do Strongarm and Disruptor come with scopes?

No. But the guns feature tactical rails. You can use that to attach many accessories to it if you choose to mod them.

With that, our comparison between Nerf Strongarm vs Disruptor comes to an end. We hope this article provided you with clear differences between the revolver blasters and solved your confusion.

Choose the gun that meets your intent of use and go with it. Both the blasters have slamfire and are very capable sidearms. If you require more assistance, find friends who own the guns and give it a try yourself.